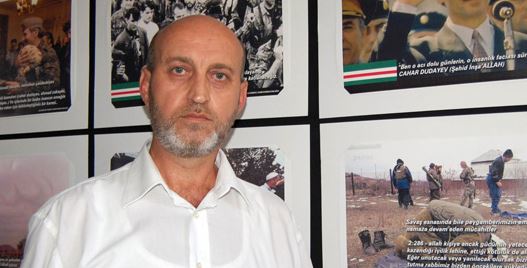 Medet Önlü was born in Kahramanmaraş, Turkey in 1960. He completed his university education in Bursa. He learned the Chechen language on his own at a young age and eventually became one of the experts in Chechen language and culture in Turkey. He was also interested in politics and occupied himself with the challenges faced by the Chechen community in Turkey. Additionally, he assumed an important role during the Chechen-Russian War in 1994.

Medet Önlü, who opposed the invasion of the Russian Army in Chechnya – as well as the injustices and human rights abuses committed by the Russian-controlled government that seized control of executive powers afterward – had been one of the most important representatives of the Chechen independence struggle in Turkey for many years.

He was assigned as the Honorary Consul of the Chechen Republic of Ichkeria, which was later invaded by Russia. He held that title until he was killed.

Medet Önlü dealt with the problems facing Chechen Diaspora. He provided help for people who escaped the wars in Chechnya, this included families, veterans and students. For longer than a dacade, Chechens had not been able to acquire legal status in Turkey. This has resulted in their inability to have their basic needs, such as housing and employment, met. They have no legal right or ability to use public social services in Turkey. Many refugees had been receiving various types of support from Medet Önlü, who assisted them in navigating through the challenges that awaited them once leaving Chechnya.

Önlü, who was married and a father to three children, was earning his living from importing/exporting. He used his office, located on Ankara Balgat Çetin Emeç Avenue, for his business activities as well as for his political mission.

On May 22, 2013, Medet’s wife and children became worried after they had not heard from him for some time. At 11:00 pm that evening, his relatives went to his office and there they found his dead body. Office personnel stated that they had left the office at 6:00 pm. It is believed that someone known to Önlü must have been involved as the killer knew when he would alone. It is assumed that the killer was invited in, killed him, and escaped.

How He Was Killed and How It Was Traced

Immediately following the assassination, the police and Önlü’s family both arrived at the scene. It was noticed that there was a video camera in the building. Its footage was taken by the police. Upon some frames’ from this video leak to the media, the hitman was identified quickly.

Aside from the video camera footage, the only thing that provided information about the hitman was Medet Önlü’s personal diary, which was not known by nobody but a few close people of his. For many years, Önlü had been writing daily, handwritten notes in Chechen. From his entries, it can be ascertained when he first met the hitman and who had introduced them. Önlü’s immediate and extended family once again took the intiative and provided this information to the police. They translated the entries from Chechen to Turkish for the police.

Based on the combined evidence, the instigator of the assassination was a Russian Federation citizen, Rizvan Ezbulatov. Rizvan who introduced himself as Ruslan, met Önlü some time prior to the assassination:

Murat Aluç, a Turkish citizen, born in Turkey in 1967, was introduced by Rizvan to Önlü as “a local business partner of his”. After this, Murat Aluç, who introduced himself as “Kemal”, made a short visit to Medet Önlü’s office on May 18, 2013, four days prior to Önlü’s assassination.

On May 21, 2013, Aluç came to the office again in the evening hours to carry out the assassination. Realizing that Medet Önlü was not alone at the time, he found a pretext to visit the following evening: